DEATH FROM ABOVE w/ EAGLES OF DEATH METAL & BIBLICAL CANADIAN SPRING TOUR "At first glance it may seem like this tour pairing is too funky to be true. However, when I gaze

“At first glance it may seem like this tour pairing is too funky to be true. However, when I gaze backwards in time, it seems that our fates are inextricably intertwined. It began back in 2005 on tour with Queens Of The Stone Age when EODM founding member, Joshua Homme, mentioned that he had a friend back home with a better mustache than ours (our band doesn’t share ONE mustache, we had one each). That friend back home was Jesse Hughes. Jesse is what I would consider a real rock-and-roll creature. He was born in a jean jacket. In fact, he was wearing a jean jacket when our fates collided for a second time: Christmas shopping at a Best Buy in the Atwater Village area of L.A., December 24th, 2012. I saw him from across the parking lot wearing a Canadian tuxedo (Google Image search!) and aviator sunglasses. I thought to myself: There’s only one other rock-and-roller on earth baddass enough to face a shopping tsunami at a major electronics big-box on Christmas Eve, Jesse from EODM. I creepily admired him from afar while I shopped for a Bluetooth speaker. The only difference between him and I at that moment is that he looked like the lead singer in a rock-and-roll band and I looked like Val Kilmer in Weird Science. The next stop on the Wheel-Of-Fortune-Of-Life brought us together in a dusty barbecue shack in the Mojave desert. I was hunched over a pile of charred bones, my face and hands so sticky with sauce I looked like a hyena feasting on the African savanna. I looked up from the carnage and who did I see? Two tremendous Eagles: Dave Catching and Joshua Homme. Eagles Of Death Metal are like peyote; You don’t find them, they find you. I did them the service of washing up the gore before walking over and saying “Hello, it’s me”.

If all of this seems like a crazy reason to go on tour together, I think you’re crazy.

Canada, get ready for real rock-and-roll and wear your tuxedos.”

Sebastien Grainger, Death From Above, February 2016 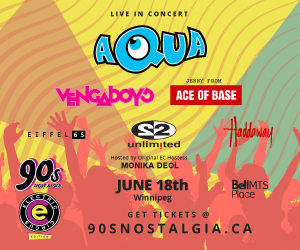