Miles to Go, Colin James’ ambitious sequel to the critically acclaimed Blue Highways, continues James’ story with a collection of carefully curated songs handpicked from some of the greatest blues artists.

In the months leading up to the recording, as James was reflecting on songs for the album he decided to reacquaint himself with a beautiful red Gibson ES-335. It was just like the guitar he played as a teenager but regretfully had to sell for rent money.

While James reconnected with this guitar, Miles to Go seemed to just flow onto the studio floor.

This album blends songs old and new, some of them completely reimagined and some almost perfect homages. But all are unified by a theme of undying love for the blues and the highest respect for the creators that led the way.

Known as one of Canada’s best blues musicians, it wasn’t until 2016’s Blue Highways that James found himself on a blues chart: the album spent 10 weeks at No. 1 on the Roots Music Report’s Blues Chart. It also landed him one of his biggest hits: “Riding in the Moonlight”. A Willie Dixon song that James once covered when busking in the streets and subways of Toronto and Montreal that landed on a Spotify playlist garnering millions of streams.

View hotels and apartments near Burton Cummings Theatre on Stay22 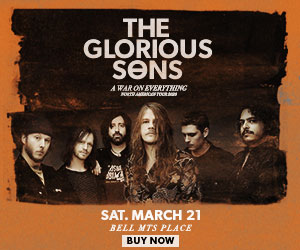